I get a lot of emails about spiders. All are wonderful, but some are particularly special.
Robin wrote to me about watching Pholcus phalangioides:  Daddy long-legs (Australian name) or Cellar Spiders (US name). 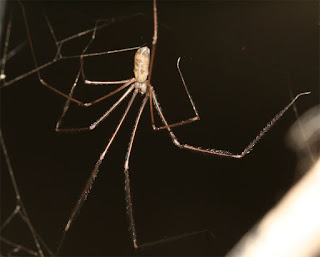 I'll let Robin tell her own story (with her permission).

I’m so glad to have tripped over your blog!!!

I didn’t give much attention to my spiders when gardening, except to try not to upset their webs. I’m not even sure how many types of which kinds of spiders lived in my garden. Having been a neat freak my entire life left me with few creepy crawlers. I have a very large garden which makes up for my lack of bugs inside.

In 2012 I was diagnosed with MS, and over the years have become less and less able to clean “my way.” I have had to allow some of the rooms in my house to be “closed doors.” 😢

My husband of 34 years, bless his loving heart, did his best to keep my ground floor, living room, kitchen, bath, and master bedroom up to snuff. I lost him in February to kidney failure. In my grief, I just didn’t care about the house 🏡 at all. (It’s not “that” awful, but to me...ewww.

I have very small amounts of strength (I’m rarely awake more than 5 hours daily), and my only chore is feeding my cat. I have aides come in to tend the rest. One comes for my shower, another does my errands like groceries, banking, & laundry. I’ve yet to find one that will clean the house without grumbling.
Sorry for the background info...
In any case, I’ve always loved spiders 🕷, especially in my garden! Yay 😁!!!

BUT, I’ve become fond of 4 spiders that live in my bathroom. I’m sure I have many more in other unused rooms, but have trouble getting to these rooms, being in a wheelchair.

I’ve figured out that 3 are female and 1 male. I’ve discovered what molting is. This completely freaked me out, as my first thought was my friends were being eaten by larger spiders. Nope, they just grew up. Two females are very large now, scary large to any visitors! I DO warn them before they use my restroom.

The third female has one more molt before she will be able to breed. (This is my guess, but seeing these 4 lovelies many times daily, I am pretty positive.)

The fourth, I thought died several times. Just when I’d given up hope of ever seeing “friend spider” again, he’d show up in his regular web, as if nothing happened. It’s taken 2 years, and long searches for him when he goes on a walk about. He has simple webs to get to each of the 3 females.

I am quite excited because my largest female has a sack of spiders on her... I wasn’t sure if it was that, or dinner being prepared for later. Over a few days, (I’m crazy bad with time) I realized it was indeed, eggs. I’m unsure how long until they hatch, but I can see lots of legs appearing inside.

My concern is why she would decide her web to be safe, as she knows me, she knows I come 'n go often, she’s about 3 inches from the floor just to the left of the door jam, under the sink, far under the light switch. I realize their brains are far smaller than ours, but I’d assume the safety of her youngsters would be high on her brain function list... she knows I stop 'n visit every time I go into the bathroom, having to make a sharp 90 degree turn to get inside, having big clunky wheels taking the entire doorway. When they do hatch, I’ll have no ability not to run them over on my way to the toilet.

She IS beside the cabinet under the sink, might she hide in there to keep them safe?
Any ideas?
Any idea how long til they hatch?

My male spider was larger than the females, but now, the females are a bit larger than him. I watched him wonder from gal to gal, staying a whole day, once female he stayed on her web for two days.

Originally, I thought it was a larger intruder, coming to eat one of my 3 friends, and almost swatted him to save my friends. I decided to (see what happened) let nature take its course. They (mainly he) wandered up 'n down, doing a dance (or puffing up to scare her away without a fight), after his two days with female #2, he disappeared, and my friend was still alive and well. Two days later, he was with spider #1 for a day. Then a long trot to the opposite corner of my bathroom, in the windowsill, there he was, checking on #3. He didn’t stay long, maybe because she was still too young?

The following day, my missing spider, whom I’d given up hope of ever seeing again, was firmly hanging in the same web he’d been in everyday for months (the back of the bathtub wall, hanging from an unused towel bar).

I don’t “keep” spiders, and never had any until my house got dusty... whoever does any cleaning does remove cobwebs and spiderwebs (except in the bathroom).

My roof sprung a leak in this bathroom, so I’m assuming they arrived to save themselves from wintering outside (I live in Chicago where winters are pretty nasty!! Cold, ice, ice storms, fierce wind, as our nickname is “the Windy City 🌃,” windchills can be below zero regularly, some days hitting -40 Fahrenheit, whiteout blizzards bringing 2-27 inches of snow ⛄️.) Seemed logical to me that they’d prefer my bathroom to outdoors.

That’s my story, and these are my buddies.

Thank you so much for such a fascinating email. You have certainly had to face challenges way beyond what most people could even consider. I am so pleased that you have found the joys of not being a perfect housekeeper - the main one being that you get to observe spiders.
I'm so glad also that you are not freaked out by molting any more and find it a fascinating thing to observe. Once you get to know your individual spiders, they open up a whole new world to you on their little stages. One male and three females sounds about the right ratio that I would have in the kitchen normally - and the male does his rounds. You're certainly making very close observations. And your largest female has an egg sac! You've probably got another week or so before they hatch. Have you got a very bright torch which you can use to watch them even during the day? You'll see a lot more with a torch, especially the modern bright white light torches.
Your female is very low down. I wouldn't worry about the young going on the floor. I'm almost never seen a daddy longlegs on the floor. They usually head up to ceilings. But most of the young will disappear anyway, and I don't ask questions where because I suspect that they have become sibling-stew the victim to some other predator and I don't like to think about that.
The dance you describe between the male and female fascinates me. I can see that they are twanging the web at each other - the way they communicate because they can't see each other. Their eyesight is really weak but their sensitivity to air movement, and especially to the web, is very strong.
What I wonder is whether there is a pattern to the messages they are strumming out. I've read of small predatory spider, the Portia species, twanging the webs of spiders who are their main prey. They keep changing the pattern until they send a message which is the equivalent of either a male signalling to the female or of prey caught in the web - the researchers didn't know which. When Portia gets the pattern right, the prey spider comes out and is grabbed. I've seen something similar with our white-tailed spiders when they prey on our most common house spiders here in Eastern Australia, the black house spider. I've lost quite a few of my favourite pets that way which means the white-tailed spider is one I don't welcome. But I still can't bring myself to kill them.
It is logical that the male daddy long-legs are actually using a specific pattern to communicate with the female to say that it is a male of the same species, not some kind of prey caught in the web to be eaten. But I've never observed it close enough nor often enough to be able to say whether there is a pattern in what they're doing.
If I lived in Chicago, I'd be venturing indoors too! But our daddy long-legs are all indoors or around the house, and we certainly don't have extreme conditions like that. I suspect in Chicago any that were still outside would soon be frozen and dead. 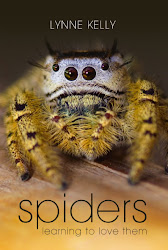